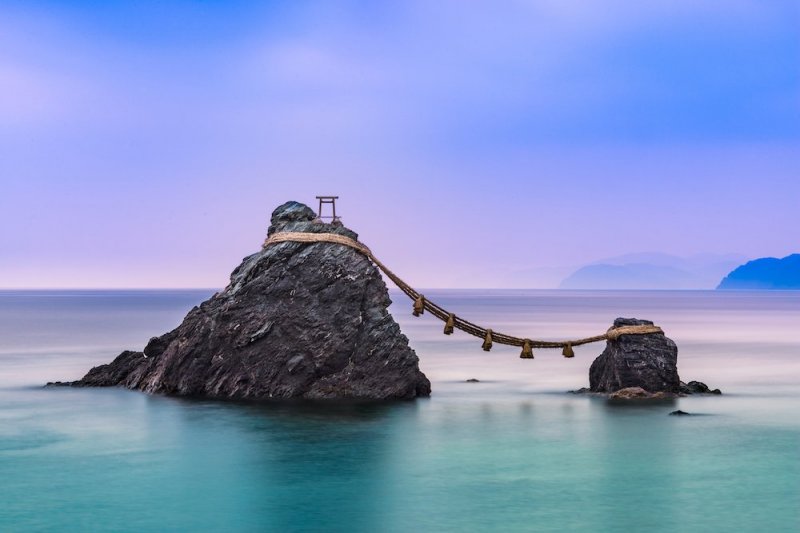 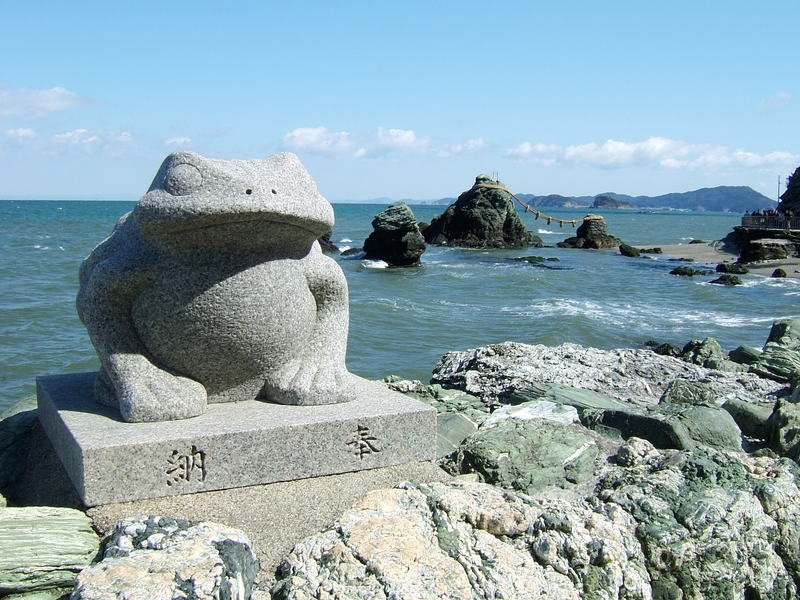 In Mie Prefecture, not far from the city of Futami, which belongs to the city of Ise, are the Meoto Iwa rocks, which are also called" The Married Rocks ".

These two sacred rocks in the sea near the coast are not far from the Futami-Okitama Shrine, the Ryuugu Shrine and also near the famous Ise Shrine itself.

The two rocks are connected with a so-called Shimenawa. This is a ritual rope made of rice straw. This fact gave them the nickname "The Married Rocks"

In the belief of the Shinto religion, these two rocks represent the union of the pair of gods Izanagi and Izanami, who, according to legend, are the two central gods "Kami" in the myth of the origin of Japan.

A 15-minute walk from Futaminoura Station or a short bus ride via the local sightseeing CAN bus.

Visit Iruka-jima (Dolphin Island) in Mie Prefecture for an amazing time admiring the sea and these wonderful marine creatures. For the fare of riding the ferry from Toba Bay, you’ll also be able to enjoy the aquarium at Dolphin Island and interact with these cute animals. There’s plenty to do on Dolphin Island and getting there is half the fun. Ride one of three passenger ferries and take in the beautiful vista of Toba Bay. Once you arrive at the island, you can take a lift up to the observatory and have a sweeping view of the whole bay and its many islands. At the dolphin show, watch the trainers feed and interact with dolphins and sea lions—and after the show, for an additional fee, meet the stars of the show and even touch a dolphin.

Off the coast of Toba is Mikimoto Pearl Island. This Mie Prefecture attraction is the birthplace of cultured pearls and is operated by the Mikimoto Pearl Museum. When visiting the island, guests can see fascinating and beautiful handcrafted pearls and exhibits, and even ama divers watch while collecting pearls. In 1893, Mikimoto Jokichi succeeded in growing the world's first cultured pearls on an island in the Ise Bay. In 1951, Mikimoto bought the island and renamed it Mikimoto Pearl Island in order to establish a pearl museum there. The Pearl Museum displays many great works of pearl art, including a globe made from 12,541 pearls, 377 rubies and 373 diamonds. It has a diameter of 33 cm. There are also exhibits from ama divers. These freedivers collect pearls using a technique that is over 1000 years old. Mikimoto Pearl Island is one of the few places where visitors can watch these remarkable women at work.

Toba Aquarium in Mie Prefecture houses twelve aquatic zones with over 25,000 creatures spanning 1,000 species. On the 1.5-kilometer long pathways, guests can discover the wonders of rare marine animals that are in danger of becoming extinct. Some spectacular exhibits include a finless porpoise, the birth of a second-generation sea otter for the first time in Japan, and dugong or manatee breeding. The aquarium also features a sea lion show, penguins, and special exhibitions. By visiting Toba Aquarium, visitors can behold these spectacular creatures and contribute to the preservation and breeding programs of the aquarium. Toba Aquarium has received over 55 million visitors since its construction in 1955, making it one of the most visited aquariums in Japan.