How to Get From Haneda to Central Tokyo

Haneda Airport International Passenger Terminal is located just 14km south of Tokyo Station and is one of two international airports serving the capital. A dedicated international terminal was opened in 2010, allowing this central air hub to function 24-hours a day. Situated conveniently in Tokyo’s Ota City, you can travel on to popular destinations such as Shibuya, Asakusa, Shinjuku, and Tokyo Station in less than 60 minutes! Travelers can choose to proceed to their final destination by bus, rail or taxi, all of which are easily accessible from the terminal building. Read on to see what your public transit options are and to learn which are most direct and cost effective.

*For more detailed information or alternative routes, please feel free to ask the staff at the station or the airport.

Jump on the Narita Airport-bound Keikyu Line Airport Rapid Limited Express train at Haneda Airport International Terminal Station and alight at Shinagawa Station. Here you can transfer to the JR Yamanote Line（Towards Shibuya and Shinjuku) that takes you on to Shibuya. The total journey time is around 29 30 minutes and costs 580 yen (572 yen if you own a Suica or a PASMO card). If you’d rather avoid a transfer, you can opt for the Limousine Bus coach service that will transport you directly for 1030 yen with a journey time of 30 to 70 minutes.

Catch the Narita Airport-bound Keikyu Line Airport Rapid Limited Express train at Haneda Airport International Terminal Station and you will arrive at Asakusa in approximately 40 minutes for 620 yen (572 yen with Suica or PASMO) without the need to transfer. You also have the option of taking the Limousine Bus for 930 yen, the ride lasting between 20 and 65 minutes.

You can catch the Keikyu Line Airport Rapid Limited Express train to Shinagawa Station and transfer to the JR Yamanote Line for Shinjuku from here, the total journey time being around 45 minutes and costing 610 yen (601 yen with Suica or PASMO) Alternatively, there is a Limousine Bus that will transport you directly from the airport terminal for 1230 yen (duration 35 to 75 minutes).

Catch the Keikyu Line Airport Rapid Limited Express train from Haneda Airport International Terminal Station to Shinagawa Station. Then transfer onto either Omiya-bound JR Keihin-tohoku Line or the JR Yamanote line for Tokyo / Ueno and arrive at Tokyo Station in just a few stops. The combined fare would cost 580 yen (572 yen with Suica or PASMO) and the journey time is around 35 minutes. Meanwhile, the Limousine Bus service takes 30 to 55 minutes and costs 930 yen.

For travelers touching down in the early hours of the morning or midnight, bus or taxi services will be the only options, as the rail network is not currently 24 hours. You will need to approximately double the fare for night bus prices. Those who prefer to travel by taxi can pick one up at the terminal taxi stand or book themselves a private hire. 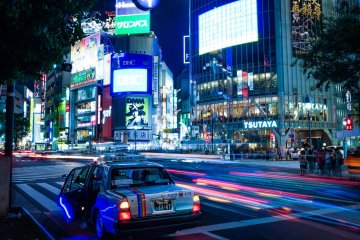