This mountain temple is one of Hiroshima's hidden gems.

Many visitors arrive in Hiroshima after a few days in Kyoto, and the thought of visiting yet another temple or shrine leaves them less than thrilled. Mitaki Temple, however, is one of Hiroshima's hidden gems, and I have yet to meet a visitor who, no matter how "templed-out", hasn't been delighted that they made the effort.

The Shingon Buddhist temple dates back to 809, and is located in a steep, heavily forested valley on the side of Mt Mitaki-yama and takes its name from the three waterfalls within its grounds. It is most well-known, perhaps, for the Tahōtō two-storied pagoda, said to date back to the Muromachi period (1392-1573), relocated from a shrine in Wakayama Prefecture in 1951; a donation to help assuage the souls of those lost in the A-bombing. The pagoda is designated as an Prefectural Important Cultural Property and the wooden Amitabha Buddha inside a National Important Cultural Property.

The real charm of Mitaki, however, is in its atmosphere. As you make your way through the temple complex, up the moss-covered stone steps, you pass hundreds of buddhist images and jizō statues in their bright red caps and bibs, each with its own unique countenance and expression. As you might expect in a place named after its waterfalls, this place is very green, and as you get closer to the far reaches of the grounds the trees become more and more magnificent. The place feels almost enchanted.

All the stone, moss and streams means that Mitaki is a beautiful place to visit even in the rain. In fact, I highly recommend going on a rainy day, as it's unlikely that you will find many other people there. The approach to the temple, up the road that runs from the train station to the temple entrance is lined with cherry trees, and the park (not much more than a dirt play area) below is a popular hanami spot during the cherry blossom viewing season. It is in autumn, however, that Mitaki really comes into its own. The leaves positively blaze red and photographers burn through many many gigabytes during November kouyou autumn leaf-viewing season.

The mountain on which the temple sits is known variously as Mitaki-yama, Uematsu-yama and Soko-yama. The latter two names come from the fact that the samurai tea master responsible for the design of Shukkei-en Garden in central Hiroshima, Ueda Soko, planted a pine tree on the summit to enhance the natural backdrop of his garden and tea houses.

The hiking trail over the mountain is a popular one and is accessible all year round. The trail (marked "Course B") starts from just inside the temple gate and immediately after passing the Tahōtō pagoda. It's a fairly steep climb of about 1100m to the 356m high summit, but the views are worth it. The trail to the left (with the city view behind you) takes you along the ridge and drops you at the top end of the temple complex after a bewitching descent through a beautiful bamboo forest.

There is also a charming rustic tea house called Kutenan within the temple grounds which has tables inside and outside and serves simple Japanese food and some delicious Japanese desserts.

A total of 18 years in Japan and still loving it. Co-founder of GetHiroshima.com and publisher of the GetHiroshima Guide Map. Lapsed Ironman triathlete. Now trying to fit a passion for ultra distance trail running between raising two kids and occasional sessions in the DJ booths of Hiroshima. 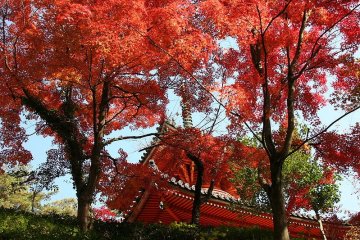 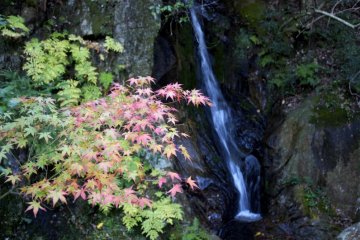 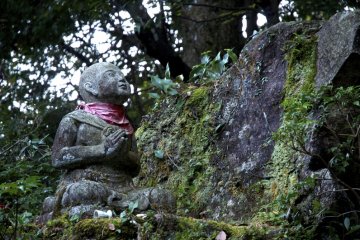 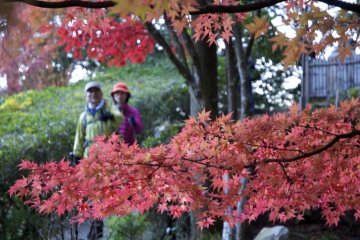 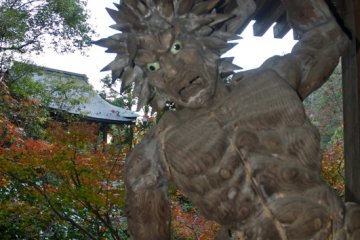