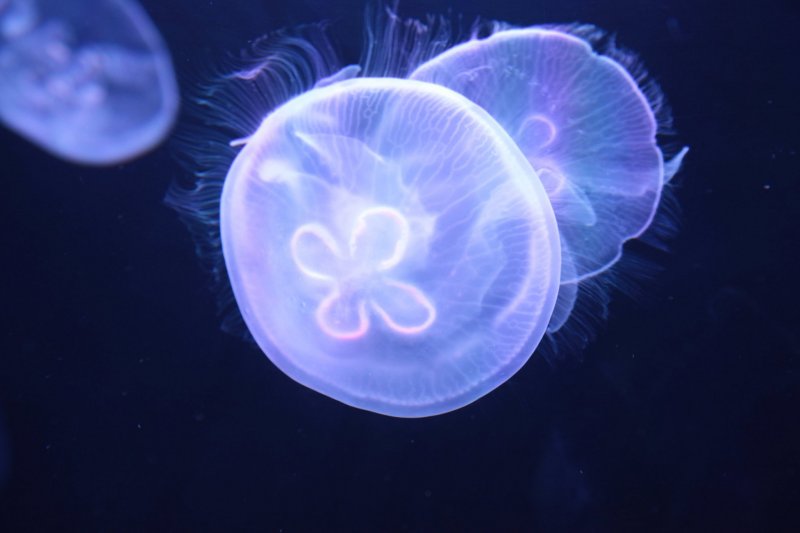 Sumida Aquarium has been bringing aquatic wonders to the Tokyo Skytree area since 2012. The aquarium is a two-floor housing complex for over 10,000 animals. With its artificial seawater system, the aquarium also reduces CO2 emissions in ways that most other aquariums do not. The aquarium centerpiece--a 350,000-liter tank--is the largest of its kind in Japan and is home to penguins and fur seals.

The aquarium lies in the West Zone of Tokyo Skytree Town on the 5th and 6th floors. Instead of following lines or pre-chosen routes, guests are instead free to find their own way through the aquarium and enjoy the aquatic animals from many angles. There are also many seating areas scattered throughout the aquarium to enhance watching experiences and allow visitors to take a break while they wander.

As of 2020, the Sumida Aquarium has also added a jellyfish exhibition area. Watch jellyfish float beneath you in a surreal alien landscape from the viewing platform. More than 500 moon jellyfish are illuminated in this area and create a one-of-a-kind view.

The gift shop is where you can find all kinds of merchandise and stuffed animals of your favorite aquarium inhabitants. Visit the café and restaurant for a snack or a meal, and be impressed by their themed foods.

A short walk from Tokyo Skytree Station on the Tobu Skytree Line.

NOHGA HOTEL AKIHABARA TOKYO is conveniently located in the midst of electric town Akihabara, also known as the capital of manga and anime. In addition, this neighborhood has an abundance of tech shops, maid cafes and a variety of restaurants. With just a 6 minute walk away from Akihabara station, it provides easy access to explore other areas nearby such as Ueno and Asakusa. This hotel embodies the rich cultures of music, art and food. Nohga’s concept of music is derived from Akihabara’s local history, starting as a district of radio and wireless component merchants in the late 1920s. The artistic and luxurious space throughout the hotel is achieved by featuring art and amenities designed in collaboration with craftsmen from around Japan. As for the food menu, it’s seasonal fresh ingredients are sourced domestically. The glasses and dinnerware served are collaborations with stores in the surrounding area. All 120 non-smoking guest rooms feature an ensuite bathroom with a rain shower, in-room safety box, mini fridge, USB plugs, free Wi-Fi, a high-quality bluetooth speaker and flatscreen TV with original music and film. The lounge area and a compact 24-hour gym can be found near the reception on the second floor. Services include laundry (from 2,750JPY) and a 24-hour front desk with a check in time of 3PM and check-out time at 11AM For sightseeing you can rent a Tokyobike for the day (2,000 JPY/day) to explore the vicinity.

Oakwood Premier Tokyo comes from a brand of standout luxury hotel & service apartments right at the heart of the Tokyo metropolis. It is located in the business hub of Marunouchi with JR Tokyo Station in close proximity. This will allow guests and travelers to easily access the city's extensive transport network and visit various landmarks such as Imperial Palace, Tsukiji Fish Market, Ginza and Shopping District. Boasting 123 luxurious apartments on the upper floors of a multi-serviced complex, each room offers a magnificent view of the city not to mention all furnished and a fully-equipped kitchen set which is rarely seen in your everyday service apartment. Without doubt, these spacious tranquil retreats are curated to give you the amenities and services of a luxury hotel and a feeling of home. They are good options for both business executives and leisure travelers from one night of a short-stay to a few weeks/months of mid to long-term stay.

Enter the world of Moomin, the Finnish fairy-tale comic characters, in the exclusive Moomin Café in Tokyo Skytree Town. This permanent Moomin Café is specially designed for Moomin fans and offers dishes, desserts, drinks and decorations on the Moomin theme. Whether you are alone or eat in company, a plush Moomin figure will keep you company at the table. The figures of the Moomins are hippopotamus-like troll creatures and were invented by the writer Tove Jansson. They love in the idyllic Moomin Valley somewhere in Finland. The Moomin characters are very popular worldwide and their adventures have been translated into more than 30 languages. There is another highlight for real Moomin fans: The "Moominvalley Park" theme park was opened in March 2019 about 40 kilometers northwest of Tokyo in Saitama prefecture and offers further insights into the world of trolls.

PIZZERIA & BAR NOHGA is an all day dining restaurant interpreting a fusion of “Spanish Italian” cuisine and has a kitchen to table design. There is a casual bar area and restaurant where you can take a peek inside the open kitchen whilst enjoying your meal. Visit the cafe for a range of coffees and teas along with an offering of tapas snacks and seasonal desserts. The cafe also offers an assorted dessert and all-you-can-drink cafe set. Breakfast takes on the art of sharing, where a range of platters are combined with focaccia and your choice of eggs cooked your way. Coming for lunch? Choose from a selection of pizzas, pastas and salads. Each lunch menu is accompanied with homemade soup, iced tea and focaccia. Dinner time offers a range of exquisite tapas and pizzas that can also be shared. Breakfast: 07:00 - 10:00, Lunch 11:30 - 14:30, Cafe 14:30 - 18:00, Dinner: 18:00 - 23:00 with last order at 10pm.

The Pokémon Café in Nihonbashi, which opened in March 2018, is the latest character café in the popular series of games and series in Tokyo. The café and the adjacent Pokémon Center DX store were opened in 1997 on the occasion of the 20th anniversary of the first store. The bright café, which is furnished in warm wood tones, offers main courses, desserts and drinks - all of which are arranged with a focus on one or more Pokémon and some are suitable and limited to certain topics or seasons. You can also find exclusive merchandise here - from plush toys in chef jackets to bowls and cutlery with Pokémon motifs. They also sell Pikachu Sweets, special sweets and products with the most popular of all Pokémon as a motif. A visit to the Pokémon Café is only possible with a prior reservation, time slots can be selected from one month in advance and also in English via the website. It is located on the 5th floor of the Nihombashi Takashimaya Shopping Center, which is not far from the Tokyo and Nihonbashi stations.

Senso-ji Temple (浅草寺, Sensōji) is a popular spot for omikuji, or fortunes. These auspicious sheets are offered in a multitude of languages, enticing both Japanese and foreigners alike to see how their luck plays out. If the number you draw is less than lucky, don’t worry – simply tie up the offending fortune on the nearby wires and allow your bad karma to be spirited away. The temple also shares its grounds with the Asakusa Shrine, dedicated to the three men credited with the temple’s founding. Considered one of the oldest original buildings in Tokyo, the shrine plays host to the exuberant Sanja Matsuri every May. Another popular building (and photo spot) is the five-story pagoda A number of other festivals take place at Senso-ji throughout the year. The Kinryu-no-mai (Dragon Dance) can be enjoyed on March 18th and October 18th, when a large golden dragon on poles is paraded through the streets. Visitors on April 14th can witness the Sagi-no-mai (White Heron Dance), which features a parade of participants in both Heian-era outfits and heron costumes. In late autumn, the temple’s atmosphere grows even more exuberant during its end of the year rake fairs. Buyers come to purchase one of the many colorfully adorned tools in the hopes of raking in good fortune in the coming year. It is arguably one of the most popular tourist destinations in the city, Senso-ji Temple – also known as Asakusa Kannon – can trace its roots back to the early 600s. In 628, two fishermen on the nearby Sumida River repeatedly brought up a golden statue of the Buddhist goddess of mercy along with their usual catch. Finally deciding not to throw the statue back to the depths of the river once more, they instead brought it to their village headman, who convinced them to build a temple in its honor. Senso-ji Temple was finished in the year 645 and quickly became a pilgrimage site. Its popularity endured over the centuries and even continues in the present day, with most visitors making this one of their first stops in Tokyo. The road leading up to the temple, known as the Nakamise-dori or “street of inner shops”, peddles everything from lacquered chopsticks and ukiyo-e prints to cheap keychains and colorful trinkets. Cake-like ningyoyaki¸sweet treats that are served hot off the iron grill, are a popular purchase, as are warming cups of amazake in the winter months.