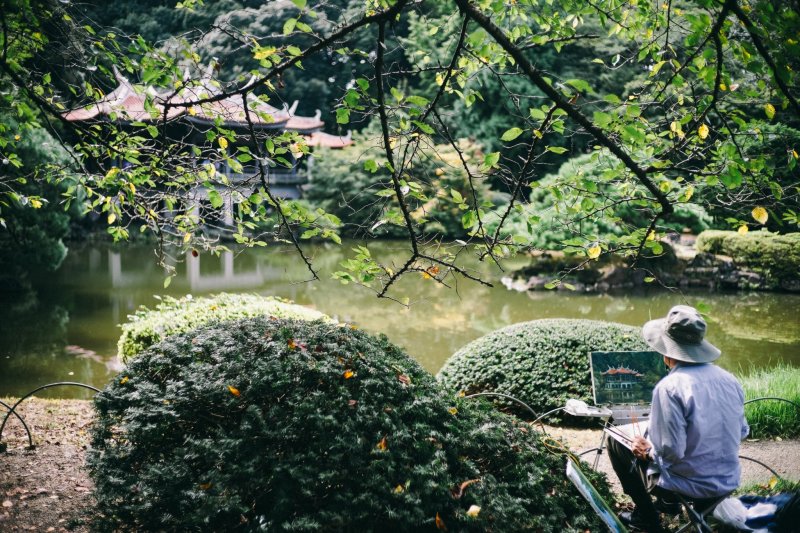 Shinjuku Gyoen is one of the largest and most popular public gardens in Tokyo. The park is just a short walk from the well-known Shinjuku district and is particularly famous for its seasonal cherry blossoms.

Shinjuku Gyoen was created during the Edo period (1603-1867) as the residence of a feudal lord in Tokyo and was later converted into a botanical garden. In 1903 the area was transferred to the imperial family, who used it for recreation. The park was almost completely destroyed in World War II but was eventually rebuilt and reopened as a public park in 1949.

There is a Japanese garden as well as French and English gardens and a greenhouse. There are also several spacious green areas where you can go for a walk and enjoy the cherry blossom or autumn leaves.

Located right next to Shinjuku Chuo Park, THE KNOT TOKYO Shinjuku is a modern hotel with an exceptional design and easy access to the nearby Shinjuku train station and the Meiji Shrine. The 14-story hotel building was renovated and reopened in August 2018 as THE KNOT TOKYO Shinjuku . The western-style rooms offer a park view on the top floor as well as a newly opened terrace suite. The spacious atrium design offers a relaxed atmosphere and connects the restaurant, bar, lounge and lobby with one another. One of the highlights of THE KNOT is the delicious dishes. There are six areas in which food and drinks are offered. From the grill area to high-quality black tea and fresh bread, everything is on offer.

NOHGA HOTEL AKIHABARA TOKYO is conveniently located in the midst of electric town Akihabara, also known as the capital of manga and anime. In addition, this neighborhood has an abundance of tech shops, maid cafes and a variety of restaurants. With just a 6 minute walk away from Akihabara station, it provides easy access to explore other areas nearby such as Ueno and Asakusa. This hotel embodies the rich cultures of music, art and food. Nohga’s concept of music is derived from Akihabara’s local history, starting as a district of radio and wireless component merchants in the late 1920s. The artistic and luxurious space throughout the hotel is achieved by featuring art and amenities designed in collaboration with craftsmen from around Japan. As for the food menu, it’s seasonal fresh ingredients are sourced domestically. The glasses and dinnerware served are collaborations with stores in the surrounding area. All 120 non-smoking guest rooms feature an ensuite bathroom with a rain shower, in-room safety box, mini fridge, USB plugs, free Wi-Fi, a high-quality bluetooth speaker and flatscreen TV with original music and film. The lounge area and a compact 24-hour gym can be found near the reception on the second floor. Services include laundry (from 2,750JPY) and a 24-hour front desk with a check in time of 3PM and check-out time at 11AM For sightseeing you can rent a Tokyobike for the day (2,000 JPY/day) to explore the vicinity.

With Koenji being a "creatives town" it's no surprise that BnA Hotel opened there in 2016 and has had, subsequently, an incredible impact on the local community. BnA (Bed and Art) has other spaces dotted about Tokyo and Kyoto but the Koenji edition is possibly more immersive as the concept is "stay in an artwork." In collaboration with local artists the BnA has created an impressive multi-storey art experiment for art lovers and creatives with a desire to inhabit art. The first floor acts as a front desk and bar which comes alive at night with events and selected DJs. It also hosts Masu Masu onigiri cafe with artists being asked to come and exchange artwork with each other in a gesture which reflects the true spirit of Koenji. With two "living art" twin rooms taking up the second and third floors designed by a seasonal rotation of local artists, guests can engage with and inhabit their art rooms. BnA Koenji also plays host to a rooftop lounge and a basement space which is used for artists residencies where their work is shown to the public and DJ booth and streaming equipment for live performances. With live painting events and an eclectic variety of regular events the BnA Hotel becomes, itself, a living canvas. The BnA believes that it's a machigata hotel meaning that guests should (and encouraged) to interact with Koenji. Use the public sentos, eat in the local restaurants that surround the hotel and buy locally from the multitude of shops, market stalls, bars and cafes which make up the fabric of Koenji. Feted by international press such as The Guardian, BnA acts as a creative network with the concept of serendipity being discussed as the bar becomes an ad hoc meeting place where collaborations and friendships between artists and locals are born. The BnA was also instrumental in a street art festival named MCP (Mural City Project) which was supported by Suginami Ward. MCP was incredibly ambitious and truly communal with the desire to transform and coalesce the community through the creation of public murals. The BnA, Koenji and Suginami spearheaded a public art movement which should be commended and replicated throughout Tokyo.

There is a restaurant right in front of the Meguro station where you can eat your own fish. All kinds of Japanese dishes and fresh seafood are also served. In some pools inside the restaurant you can catch your own fish with a fishing rod and net and then let the staff know which table it should be brought to. You can watch the fish being prepared in the kitchen and let you know in advance how the fish should be prepared: whether as sashimi, grilled, boiled, deep-fried (with tempura) or as sushi. If you don't manage to catch your own fish, then you can of course order a fish from the menu. However, the price is much lower if you want to have your own catch cooked .

PIZZERIA & BAR NOHGA is an all day dining restaurant interpreting a fusion of “Spanish Italian” cuisine and has a kitchen to table design. There is a casual bar area and restaurant where you can take a peek inside the open kitchen whilst enjoying your meal. Visit the cafe for a range of coffees and teas along with an offering of tapas snacks and seasonal desserts. The cafe also offers an assorted dessert and all-you-can-drink cafe set. Breakfast takes on the art of sharing, where a range of platters are combined with focaccia and your choice of eggs cooked your way. Coming for lunch? Choose from a selection of pizzas, pastas and salads. Each lunch menu is accompanied with homemade soup, iced tea and focaccia. Dinner time offers a range of exquisite tapas and pizzas that can also be shared. Breakfast: 07:00 - 10:00, Lunch 11:30 - 14:30, Cafe 14:30 - 18:00, Dinner: 18:00 - 23:00  with last order at 10pm.

Situated a few minutes stroll from the north exit of JR Koenji Station, Clouds Art + Coffee is a simple affair reflecting the owners' passion for, well, art and coffee. Very chic and sparse, the space is compact with a fine selection of coffee from all over the world such as Ethiopia, Kenya, Colombia and Brazil which makes it the perfect spot for Tokyo's legion of coffee addicts. The owners curate a healthy mix of artwork from local and international artists and the rotational exhibition system means that regular customers have the opportunity to see, firsthand, the best and most intriguing art from Koenji's thriving art community. There's no censorship at Clouds Art + Coffee and artists are encouraged to represent themselves and their work in a free manner and this means, essentially, that customers can view an eclectic and liberating amount of art hand in hand with some of the finest coffee in Koenji and Tokyo as a whole. Clouds Art + Coffee is, ostensibly, a hub and tryst for art and coffee lovers who come from far and wide to sample international coffee made from the finest beans and art from emerging and established artists.

The National Noh Theatre opened in Sendagaya, Shibuya, Tokyo, Japan in September 1983. The auditorium seats 591 for performances of Noh and Kyōgen, and there is also a rehearsal stage, exhibition area, lecture room, and reference library. [Wikipedia]

The venue for the gymnastics and water polo competitions during the 1964 Tokyo Olympics, the Tokyo Metropolitan Gymnasium continues to be an important sporting facility for the city today. It will host the table tennis competition during the 2020 Olympic and Paralympic Games. The site has an interesting history. It was once owned by Iemasa Tokugawa (1884 to 1963), a politician and diplomat, and the 17th hereditary head of the famous Tokugawa shogunal family. The Tokyo government purchased the land and buildings in 1943, it was then used by US military officers for some years following the Second World War. After the site passed back into the hands of the Tokyo government in 1952, all the former wooden buildings were torn down and a modern concrete gymnasium was finished in 1956. The facility underwent a complete renovation between 1986 and 1990 and the city has continued to make additions and improvements over the years. The main arena can seat up to 10,000 people. The gymnasium has hosted both national and international sporting competitions in diverse sports, such as volleyball, wrestling, and figure skating. Since 2000, the arena has also been used for concerts and Katy Perry performed there in 2015. A new kind of system for managing the gymnasium was instigated by the Tokyo government in 2006, with Tokyo Sport Benefits Corporation being the current designated manager. Some of the facilities, including the swimming pool, training room, and athletic fields are usually open for use by the public. However, please note these are currently closed due to preparations for the 2020 Tokyo Olympic and Paralympic Games.

The National Stadium was used as the main stadium for the 1964 Tokyo Olympics and was then converted into a brand new stadium for the next Tokyo Olympics and Paralympic Games. It is located in Kasumigaoka, Shinjuku District, where the Olympic opening and closing ceremonies will be held and Paralympic Games, as well as athletics and football matches, after which the stadium will be used for sporting and cultural events.The stadium has a capacity of 68,089 seats. There is a park landscape with lots of trees around the stadium. The open facade is fitted with greenery all around and is intended to promote ventilation of the interior of the stadium. During the construction, attention was paid to the use of natural materials such as wood. This, which comes from 47 prefectures in the country, was also used for the roof construction, the facade, as well as for the changing rooms and boxes.