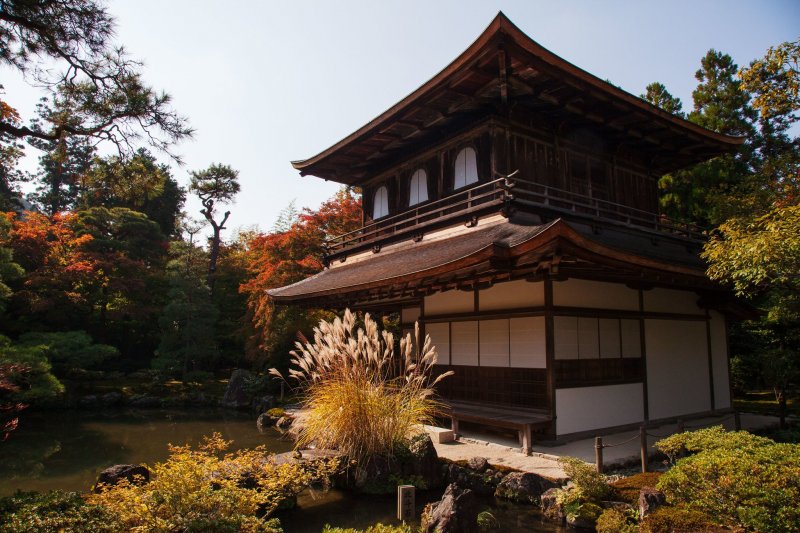 The Ginkakuji, also known as the“ Silver Pavilion ”, is a Buddhist Zen temple in the Higashiyama area in northeastern Kyoto. The surrounding gardens from the Edo period were designated a special historical site in 1952, and UNESCO took the Ginkakuji together with others Buildings in 1994 in the World Heritage Site Historic Kyoto.

Construction of the complex began in 1482 and was intended to be the retirement home of the then shogun Ashikaga Yoshimasa. However, it was not completed until his death, so it was converted into a temple according to his request. Two buildings have been preserved in their origins, of which the Kannon den is the symbol of the temple and is usually called the "Silver Pavilion", while the Togu-do contains one of the oldest rooms for the tea ceremony. The complex is also known for its moss garden and the extraordinary sand garden known as the “lake of silver sand”.

In contrast to the “Golden Pavilion”, the Ginkakuji is not covered with silver. The name probably came from the similar architecture of the two buildings.

30-minute walk from Demachiyanagi Station on the Keihan Railway

The Philosopher's Path (哲学の道, Tetsugaku no michi) is a pedestrian path following a canal lined by cherry trees between Ginkaku-ji and Nanzen-ji. The path earned its name because an influential 20th century philosopher, Nishida Taro, is thought to have used it for daily meditation.

Shinshōgokuraku-ji or Shinnyo-dō is a Buddhist Tendai temple in Kyoto. It was established in 984 AD by Kaisan Shonin. In its name, gokuraku means Sukhāvatī, a paradise. [Wikipedia]

Eikando Temple (永観堂), formerly known as Zenrin-ji temple, was established in 853 and is the head temple for the Seizan branch of Japan's Jōdo-shū Buddhist sect. The temple is known for its autumn scenery.